On a previous company the QA team needed to perform some scenarios that were difficult to reproduce, for instance force a buffering event. Their setup require deep technical understanding of Linux. In order to ease its world, I decided to create a neat service running on a Raspberry Pi.

Concretely, the scenarios that the QA needed to cover were:

Since the company had customers world-wide and some of them used Geo-blocked content, they need to access those contents through the use of VPNs. This required spending some time configuration the VPN clients on their side

There were some scenarios (I cannot remember right now) that required to block the connection to some IP. This is really easy to do on a UNIX machine with iptables, but good luck doing that on Windows.

It were some scenario where they needed to change the DNS records. For instance: www.google.com -> 192.168.1.100. I don't remember the rationale to this requirement :(

In the majority of the environments the connections with the company server's were made with HTTPS. This caused a little bit of headache while analysing the HTTP traffic.

Since most of the scenarios require some networking tweaks, the obvious decision was Linux, even better: Raspberry Pi. The project consist in a NodeJS Express application that executed scripts on the RaspberryPi.

The raspberry PI have two network interfaces: the LAN and the WiFi. The configuration is setup in the interfaces file:

In the WiFi interface hostapd service is configured in order to serve a WiFi connection. This will configure the traffic outgoing traffic from wlan0 to eth0.

Playing with tc and ifb

The network performance restrictions can be applied using the tc command and the ifb module on Linux. This module redirects the traffic from one real network interface to a virtual one. When the traffic passes through the ifb0 interface the token bucket (htb) applies the network configuration

In order to be able to avoid the Geo-blocking of contents, the company provide us a commercial VPN. This consisted on a series of OpenVPN configuration scripts for multiple countries. Therefore, the app only needs to call openvpn:

It's really easy to block an IP on a Linux box, the app only needs to call the iptables, for example:

This snippet blocks the outgoing connections to 8.8.8.8 that goes out from the WiFi network

Regarding DNS Spoofing, it's a little bit trickier, however the dnsmasq service is very useful in that situation. 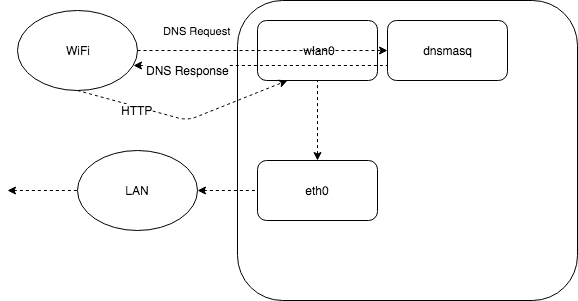 The clients connected to the WiFi will resolve the DNS queries thanks to the dnsmasq client listening to incoming connections. This service is able to perform custom DNS resolutions based on a file that works like a /etc/hosts file.

Regarding the HTTPS Sniffer, the implemented solution implies having the SSL certificates from the company installed in a reverse proxy that terminates the SSL connection and forwards the HTTP traffic to an internal server that stores the decrypted requests on a cache.

This cache can be queried from the GUI to inspect the requests. There's an additional implementation that allows to run pcap capture software directly on the network interface to inspect the packets from the UI.

This environment requires a little setup, that is the configuration of the proxy on the computers of the QA team.

Finally, the QA team were able to save a lot of time setting up their scenarios. With this app it's only a matter of clicking buttons instead of executing weird scripts

Don't blame too much on the code quality: the whole project was implemented few years ago and as a side project on one or two weekends

Here's a video of me presenting that project ;)